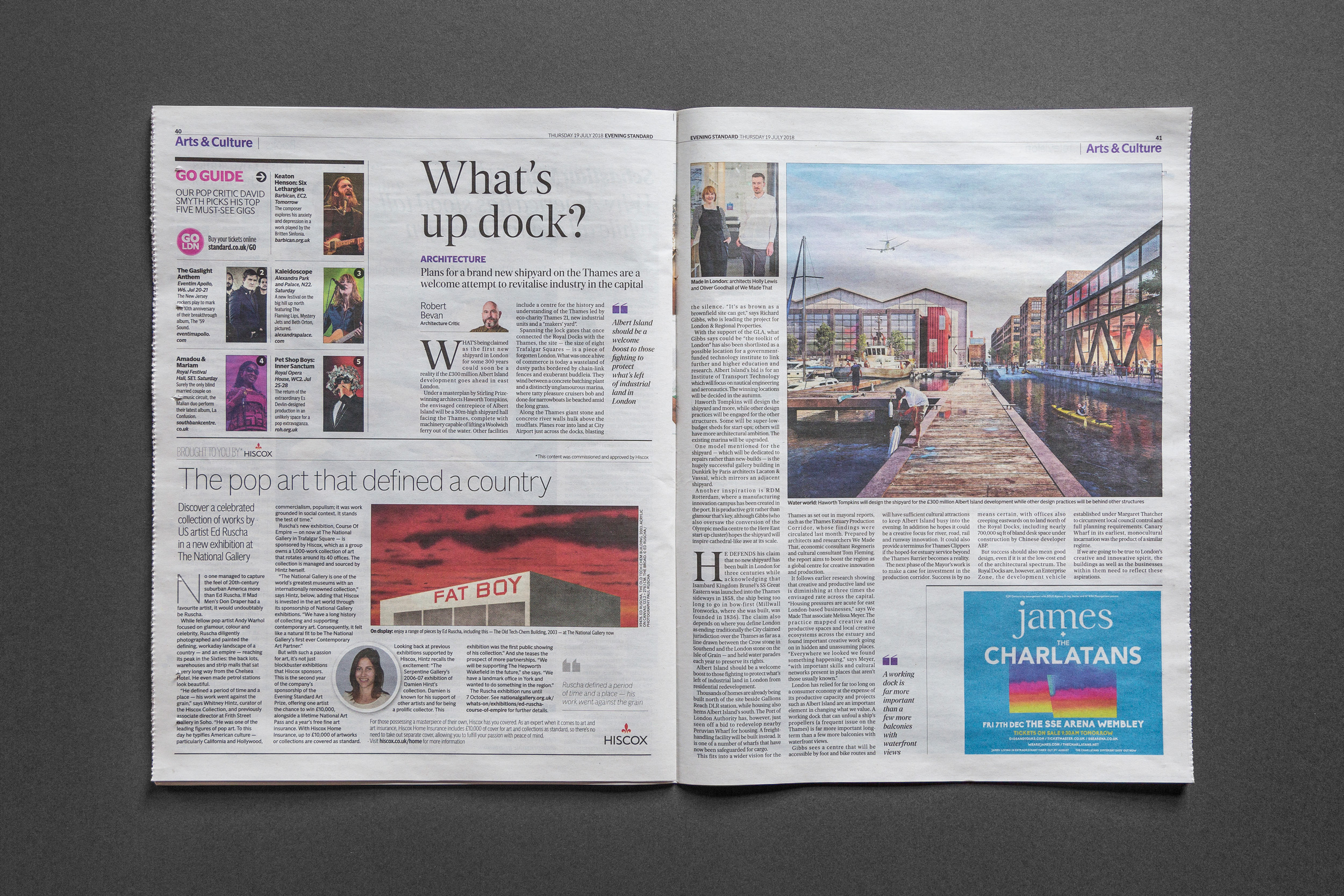 Plans for a brand new shipyard on the Thames are a welcome attempt to revitalise industry in the capital. What’s being claimed as the first new shipyard in London for some 300 years could soon be a reality if the £300 million Albert Island development goes ahead in east London.

Under a masterplan by Stirling Prize- winning architects Haworth Tompkins, the envisaged centrepiece of Albert Island will be a 30m-high shipyard hall facing the Thames, complete with machinery capable of lifting a Woolwich ferry out of the water. Other facilities include a centre for the history and understanding of the Thames led by eco-charity Thames 21, new industrial units and a “makers’ yard”.

Spanning the lock gates that once connected the Royal Docks with the Thames, the site – the size of eight Trafalgar Squares – is a piece of forgotten London. What was once a hive of commerce is today a wasteland of dusty paths bordered by chain-link fences and exuberant buddleia. They wind between a concrete batching plant and a distinctly unglamourous marina, where tatty pleasure cruisers bob and done-for narrowboats lie beached amid the long grass.

Along the Thames giant stone and concrete river walls hulk above the mudﬂats. Planes roar into land at City Airport just across the docks, blasting the silence. “It’s as brown as a brownﬁeld site can get,” says Richard Gibbs, who is leading the project for London & Regional Properties.

With the support of the GLA, what Gibbs says could be “the toolkit of London” has also been shortlisted as a possible location for a government funded technology institute to link further and higher education and research. Albert Island’s bid is for an Institute of Transport Technology which will focus on nautical engineering and aeronautics. The winning locations will be decided in the autumn.

Haworth Tompkins will design the shipyard and more, while other design practices will be engaged for the other structures. Some will be super-low- budget sheds for start-ups; others will have more architectural ambition. The existing marina will be upgraded.

One model mentioned for the shipyard – which will be dedicated to repairs rather than new-builds — is the hugely successful gallery building in Dunkirk by Paris architects Lacaton & Vassal, which mirrors an adjacent shipyard.

Another inspiration is RDM Rotterdam, where a manufacturing innovation campus has been created in the port. It is productive grit rather than glamour that’s key, although Gibbs (who also oversaw the conversion of the Olympic media centre to the Here East start-up cluster) hopes the shipyard will inspire cathedral-like awe at its scale.

He defends his claim that no new shipyard has been built in London for three centuries while acknowledging that Isambard Kingdom Brunel’s SS Great Eastern was launched into the Thames sideways in 1858, the ship being too long to go in bow-first (Millwall Ironworks, where she was built, was founded in 1836). The claim also depends on where you deﬁne London as ending: traditionally the City claimed jurisdiction over the Thames as far as a line drawn between the Crow stone in Southend and the London stone on the Isle of Grain — and held water parades each year to preserve its rights.

Albert Island should be a welcome boost to those ﬁghting to protect what’s left of industrial land in London from residential redevelopment.

Thousands of homes are already being built north of the site beside Gallions Reach DLR station, while housing also hems Albert Island’s south. The Port of London Authority has, however, just seen off a bid to redevelop nearby Peruvian Wharf for housing. A freight-handling facility will be built instead. It is one of a number of wharfs that have now been safeguarded for cargo.

This fits into a wider vision for the Thames as set out in mayoral reports, such as the Thames Estuary Production Corridor, whose findings were circulated last month. Prepared by architects and researchers We Made That, economic consultant Regeneris and cultural consultant Tom Fleming, the report aims to boost the region as a global centre for creative innovation and production.

It follows earlier research showing that creative and productive land use is diminishing at three times the envisaged rate across the capital. “Housing pressures are acute for east London-based businesses,” says We Made That associate Melissa Meyer. The practice mapped creative and productive spaces and local creative ecosystems across the estuary and found important creative work going on in hidden and unassuming places. “Everywhere we looked we found something happening.” says Meyer, “with important skills and cultural networks present in places that aren’t those usually known.”

London has relied for far too long on a consumer economy at the expense of its productive capacity and projects such as Albert Island are an important element in changing what we value. A working dock that can unfoul a ship’s propellers (a frequent issue on the Thames) is far more important long-term than a few more balconies with waterfront views.

Gibbs sees a centre that will be accessible by foot and bike routes and will have sufﬁcient cultural attractions to keep Albert Island busy into the evening. In addition he hopes it could be a creative focus for river, road, rail and runway innovation. It could also provide a terminus for Thames Clippers if the hoped-for estuary service beyond the Thames Barrier becomes a reality.

The next phase of the Mayor’s work is to make a case for investment in the production corridor. Success is by no means certain, with offices also creeping eastwards on to land north of the Royal Docks, including nearly 700,000 sq ft of bland desk space under construction by Chinese developer ABP.

But success should also mean good design, even if it is at the low-cost end of the architectural spectrum. The Royal Docks are, however, an Enterprise Zone, the development vehicle established under Margaret Thatcher to circumvent local council control and full planning requirements. Canary Wharf in its earliest monocultural incarnation was the product of a similar regime.

If we are going to be true to London’s creative and innovative spirit, the buildings as well as the businesses within them need to reflect these aspirations.

"Albert island should be a welcome boost to those fighting to protect what's left of industrial land in London."